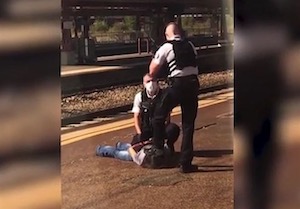 You never want to be arrested. You don't even want to consider the possibility of going to jail. You may be sure that you didn't even commit a crime. Still, the worst thing you can do if you are being placed under arrest in Sea Girt, New Jersey, is to resist or try to evade arrest. Not only are you not likely to get away from the officers, but you will make a bad situation worse and be facing additional criminal charges for resisting arrest.

If you find yourself or a loved one in a sticky situation where a charge of resisting arrest is involved, we can help you. At Tara Breslow-Testa and Associates, our Sea Girt resisting arrest lawyers are knowledgeable and experienced. In fact, criminal defense attorney Tara Breslow-Testa attends to each case herself. Her clients benefit from her individualized attention to their cases. Call us today at (732) 784-2880 or contact us online to schedule your consultation.

What is Resisting Arrest?

Words or actions can lead to resisting arrest charges under New Jersey law. Trying to pull your arms or body away from the arresting officer, pushing back against the officer, or swinging an arm as if to hit an officer are all part of resisting and can bring charges. Other acts fit the definition of the crime as well, including spitting in the officer's direction or yelling threats at them as they try to get you into custody. Depending on the facts of your case, you could face charges of assault on an officer, which will make the situation much worse.

Any attempt to stop law officers from doing their job of bringing someone into custody, whether it is you being arrested or someone else, can add up to a charge of resisting arrest. You are breaking the law any time that you react to an officer's attempt to make an arrest by:

Note that the final point on the list includes actions that may not even be aimed at the officers. For example, if you try to duck behind someone else to get out of the officer's reach and cause the other person to be injured or even risk injury, in the process, you can face charges of resisting arrest.

You can face charges of eluding arrest if you try to run away or drive away in your car when the officer has told you to stop. Whether in a vehicle on the streets of Sea Girt or a vessel in the water, any attempt to escape by fleeing from the scene will get you in even more trouble.

The law says that an intentional effort to get away or avoid stopping for a law officer who has signaled you to bring your vehicle or vessel to a stop can result in charges of eluding an officer. Eluding an officer is a third-degree crime on its own. If the attempt to flee causes a risk of death or injury to anyone, whether a law enforcement officer or a public member, you will face a second-degree crime.

Fleeing from a law officer in a vehicle or vessel when it risks causing injury or death is a second-degree crime punishable by five to ten years in prison. A presumption of incarceration is part of the conviction of a second-degree crime. The court can issue fines up to $150,000.

Refusing to stop at an officer's command or using violence or threats against an officer attempting to make an arrest is a third-degree crime. You can be sentenced to three to five years in prison and fines up to $15,000. There is no presumption of incarceration for third-degree crimes.

Trying to run away from an officer making an arrest can bring charges of a fourth-degree crime, punishable by up to 18 months in prison and fines of $10,000. There is no presumption of incarceration with crimes of the fourth degree.

Any attempt to purposely interfere with an officer's arrest is a disorderly persons offense. You can be sentenced to six months in jail and a $1,000 fine.

Wrongful Arrest is no Defense to Resisting

Even if the arrest is unjustified and you've really done nothing wrong, an attempt to resist or elude arrest is still a crime. If the officer is acting under proper legal authority and informs you that you are under arrest, you have a duty to comply.

The Sea Girt resisting arrest attorneys at Tara Breslow-Testa and Associates can defend you and protect your rights. Criminal defense attorney Tara Breslow-Testa handles each client’s case from front to back, ensuring quality representation. Call us today at (732) 784-2880 or contact us online to schedule your consultation.