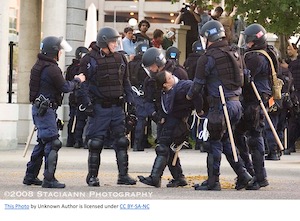 Trying to avoid being arrested in Spring Lake, New Jersey, can put you in more trouble than you were already in. Even if you're sure that you've done nothing wrong, any attempt to resist or evade arrest will add more charges to whatever you're already facing.

At Tara Breslow-Testa and Associates, we are ready to help you if you have a resisting arrest charge. Along with whatever other crimes you may be charged with, we can communicate with the court and the prosecutor on your behalf to ensure you are protected. Our clients benefit from the personalized attention of Tara Breslow-Testa, a skilled and experienced criminal defense attorney. Tara Breslow-Testa works on every case herself to ensure each client gets the attention they deserve. Schedule your consultation with a Spring Lake resisting arrest lawyer today by calling (732) 784-2880 or contacting us online.

Resisting or eluding arrest can be charged as a second-degree, third-degree, or fourth-degree crime or a disorderly persons offense in New Jersey. The most serious charges you can face come from causing a risk of injury or death when trying to elude arrest in a vehicle or watercraft after a law officer has signaled for you to stop.

You can face charges of a second-degree crime if you attempt to flee in a vehicle or vessel and put anyone at risk, whether law enforcement officers or the public. A high-speed chase is a dangerous activity for all involved and for members of the public who may get in the way, and so the crime is taken very seriously.

It is a third-degree crime to refuse to stop for an officer's command, threaten a police officer with violence, or attempt to use violence against an officer. Trying to drive away from a traffic stop or pushing, shoving, or hitting an officer will qualify for charges in the third degree.

A fourth-degree crime happens when you try to run away from an officer trying to arrest you. In this case, the attempt to flee didn't put anyone at risk of death or injury, but it still was an effort to evade the arrest by fleeing.

Disorderly persons offenses involved in resisting arrest include cases where a person purposely prevents or tries to prevent an officer from making an arrest. This can include issues where law enforcement tries to arrest you or someone else, and you attempt to intervene to stop the arrest.

Wrongful Arrest is no Defense

You might face a sentence of many years in prison and substantial financial penalties for crimes of resisting arrest.

Refusing to stop for a law officer and risking injury or death is a second-degree crime punishable by five to ten years in prison. New Jersey law includes a presumption of incarceration upon conviction of a second-degree crime, meaning that you are sure to serve time in prison when convicted. Monetary fines can be as high as $150,000 upon conviction.

Refusing to stop at an officer's command or using violence or threats against an officer attempting to make an arrest is a third-degree crime. A conviction can bring a sentence of three to five years in prison and fines up to $15,000. There is no presumption of incarceration with third-degree crimes, however.

Trying to run away from an officer making an arrest can bring charges of a fourth-degree crime, punishable by up to 18 months in prison and fines of $10,000. There is no presumption of incarceration with crimes of the fourth degree.

Any attempt to purposely interfere with an officer's arrest is a disorderly persons offense. A conviction can bring up to six months in jail and a $1,000 fine. Even if you are not the subject of the arrest, interference in the process can land you in jail.

If you were driving at the time and tried to flee to avoid arrest, you are also subject to driver's license suspension. The New Jersey Division of Motor Vehicles can suspend your license for six months up to two years.

A criminal conviction, particularly of an indictable crime of the second, third, or fourth degree, is on your record for public view. The consequences to your career and life can be long-lasting; employers, landlords, and banks all have access to criminal records and might consider your history when choosing whether to offer you a job, residence, or loan.

The Spring Lake resisting arrest lawyers at Tara Breslow-Testa and Associates are here for you. Criminal defense attorney Tara Breslow has a wealth of experience in criminal law and is personally involved in every case from front to back. Call us today at (732) 784-2880 or contact us online to learn more about how we can help.